You know all those stereotypes about France? Well some of them are true. Take, for example, the notion that the French eat a lot of long, thin bread with every meal. 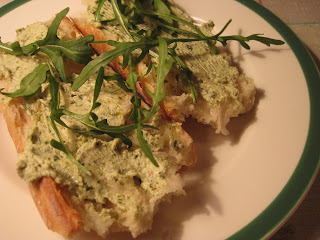 What it is, basically:
The term we anglophones are familiar with, baguette, is a broad-sweeping word. The word basically describes a loaf of bread which is long and thin in shape, probably marked with shallow, short, diagonal scores on the top. The ends can be either tapered to a point or, more usually, gently rounded. It tends to be carried by chaps in blue and white stripey jumpers.
Isn't it annoying when stereotypes need a little more explaining? It is certainly possible to go into a boulangerie (baker's), ask for "Une baguette, s'il vous plaît", and be served with an item resembling the above loaf. But try this, and you'll get a run-of-the-mill stick of bread made with uninteresting flour, and not much flavour. It'll serve purposes such as housing flavoursome sandwich fillings, or mopping up soup plates, vinaigrettes, and the like. But there's a whole range of more exciting and tasty things than the generic baguette...

Knowing your stuff:
Don't buy a baguette in a French supermarket. Really, don't. You may as well munch on the cardboard box your cornflakes come in. Go to a proper boulangerie. There's bound to be one nearby, wherever you are in France¹. Before you stride up to the counter and ask, in your best French accent, for a generic baguette, stop and take a look. Behind the display cabinet full of dairy-packed chocolaty treats and tartines, there's a rack of similar but not quite identical-looking baguettes, isn't there²?
Take a good look. Even from this distance, you can see the differing shades of brown, flax, taupe, sand, gold, yellow, ochre, beige, even a greyish-looking one. You can see differences in width, length, shape, pattern, and over all size. Grains are visible in some and not in others. Some are well-done whereas some are paler-looking. Be brave and be precise. Point, if you have to. I believe this period of experimentation is essential if you're to feel really at ease with the baguette.
Make sure you buy and eat you baguette as fresh as possible. The bread is not baked to last. It exists because it believes that most of its purchasers will be able to buy it at least once a day, probably twice. The fact that most baguettes contain no fat at all means that they cannot be kept the way that standard non-French loaves can. Eat on the day of purchase, or pay the price in dental care.

A slightly more scientific approach:
Each of these variations on the basic notion of the baguette has its merits: after all, there's a reason the bakers offer more than just a baguette. Most vary in the make-up of the dough. Baguettes made with wholemeal flour (blé complet) are slightly darker in appearance. You can buy baguettes made with several different grains and seeds (aux céréales, or something similar, depending on the bakery), which have a nuttier flavour. Sourdough (pain au levain) is always delicious thanks to its slightly acidic tang.
Let me tell you about my personal favourite. It calls itself a pain de tradition française, or a tradition, and its make-up is governed by a law brought in in 1993. A tradition cannot have been frozen at any point, and it cannot contain anything other than flour, water, salt, and yeast. This is a very nice law, since it means that all traditions are vegan. None of that eggy wash that can be stuck on a generic baguette.


France is not nearly so self-assured as the (other) stereotype would make out, but she does take pleasure in her great culinary traditions. It's not like the heritage is undeserved, after all. In this case, the harking back to the good old days has glorious results. The tradition is a bread you just can't help squeezing. I'm reminded of an old advert for Dime bars when I come into contact with one of these loaves. The croûte - the crust - is generous, and will tear the roof of your mouth away if you're not careful. The mie - the crumb - is tender in the extreme, riddled with air-pockets, and slightly iridescent. Enough dribbling...

How they make it happen:
A real baguette should be kneaded for a long time, and slowly. Then the dough should be left to sit for forty-five minutes to an hour, to relax, and to begin rising. Real French bakers bake their baguettes on the stone floor of an oven, which is seen as the traditional method. 300g of dough are needed to make the archetypal French baguette, although you'll find variation on this. No French bakery worth its weight in ... dough will be willing to disclose the precise ingredients it uses for any of its recipes.

¹Except possibly at Eurodisney. I haven't been. Let me know.
²If there isn't, get out now: this is not a proper bakery.
Posted by Unknown at 14:17