Vegan pesto can be hard to find in Paris. Your best bet is the kosher section of supermarkets, or the Kosher Franprix on Boulevard Voltaire (métro: Rue des Boulets or Nation). However, it's so easy that you're probably better off making your own pesto.

The internet is swimming in basil pesto recipes, so here's something a little different: rocket and walnut pesto. 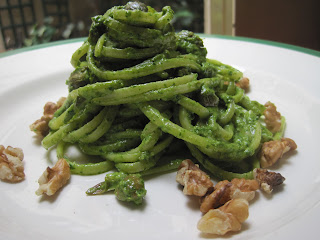 This can easily be done with a stick/hand-held blender in a jug to save on washing up. 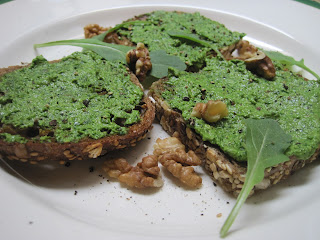 And of course on pasta. 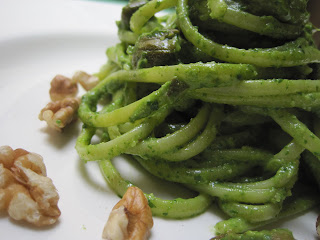 Green as green can be, and a nice change from basil pesto.

There are lots of good things about Lyon. Pretty cobbled streets, low prices, the brilliant Nuits Sonores festival, and so on. Before I visited the city with a friend at the start of the summer which has so far failed to materialise, my only concern was the food. Even our guidebook was obsessed with food. 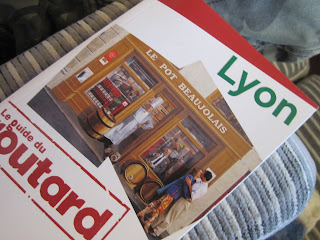 Ask a Frenchman to play word association with 'Lyon', and he'll probably say 'food'. This is a city renowned for its food culture; specifically its bouchons and prolific use of offal. Foodie central it is, friend of the vegan it is not. However in favour I am of using as much of an animal as possible once you've killed it, I was delighted to learn that there's more to the food of France's second city than tripe and brains.

My travelling companion is vegetarian, and was staying at a friend's house. Said friend provided our first Lyonnais meal, which was utterly delicious if on the unbalanced side. Travelling companion ate cervelle de canut (a sort of seasoned cream cheese - nothing to do with brains, nor even silk weavers' brains). I ate scores of the most perfectly fragrant strawberries from, (yeah, yeah) a little local farmer. We both ate doorstep 'slices' of crusty bread and really good jam. I'm very sad that I didn't get a photo.

After a night of music and frolics, we were well and truly ready for a filling lunch the next day. I'd found Toutes les Couleurs online before we set off, and the fact that it was given a good review in our very French guide book as well as being in the Croix-Rousse area we were both staying in meant that we had to go.

Toutes les Couleurs looks alarmingly health-foody from the outside, but the decor, and - more importantly - the food inside are both great. 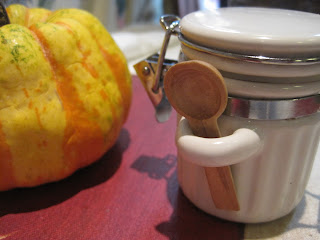 Remind me to buy a mini salt cellar like this. 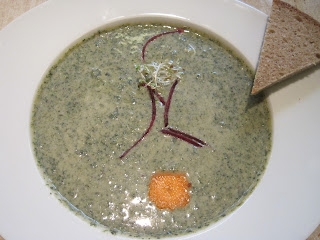 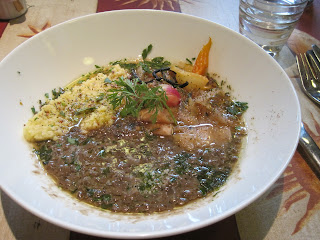 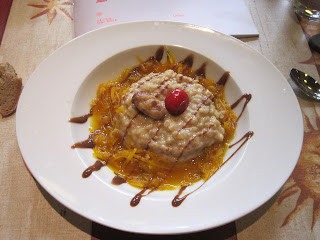 Pud: rice pud (cold, as it always bloody is in France), with carrot. Dubious chocolate sauce.

The service was good, and the chef-owner even came out once we'd finished to see what we'd thought of our meal. We were honest and told her we'd really enjoyed it. If you go to Lyon, you'll want to eat here. Beautifully seasoned interesting food, as organic and local as you like.

A trip to Lyon wouldn't be complete without a quick nosey round Les Halles, the stomach of Lyon, I suppose. It's handily located on the walking route from Part-Dieu station and the city centre. Hardly a treasure trove of vegan delights, but certainly a way to explore the gastronomy of Lyon, whether you choose to eat it or not. The picture-perfect non-vegan desserts below are a case in point. 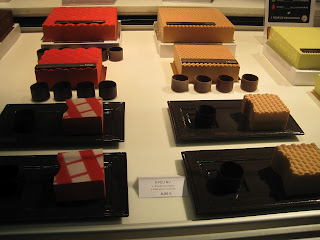 Beautiful, but not for me - like much of the food in Lyon.

Vinaigrettes and dressings are the best way to make salads less dull (and in some cases less frightfully healthy). Most vinaigrettes are naturally vegan, although in some less-than-gourmet French restaurants, there's a bad kitchen habit of thinning down some mayonnaise or milk thing and calling it a vinaigrette. It's therefore worth asking when ordering a salad what exactly goes into the vinaigrette. You can usually recognise these awful dressings when they arrive. They look kind of like the white goop here. I will make no other comparisons.

A rebellious word on emulsification

Unless you're planning to keep your vinaigrette for a long time, it doesn't really matter what order you combine the ingredients in. Don't waste time trickling in oil as slowly as possible, or whisking like a woman possessed. As long as you have fat, acid, and a binder like mustard, miso, tahini etc. you'll be fine. If it separates, it's not the end of the world - just shake it up a bit.

Shake everything together in a jam jar. Or in the mustard jar, as below, if you're nearly out. A neat way to use up the last bits left.

Play around with the proportions to find your perfect vinaigrette. 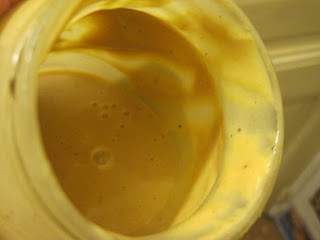 Do your jam jar thing again. 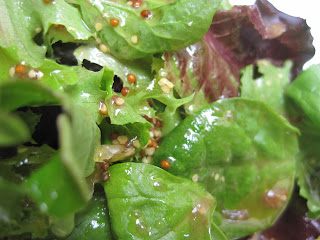 The shaky shaky method doesn't work so well here, due to the thick peanut butter. It's not much more effort though - stick everything in a mug and whisk with a fork until well combined. Add more water if you want something thinner, less if you want more of a dip. 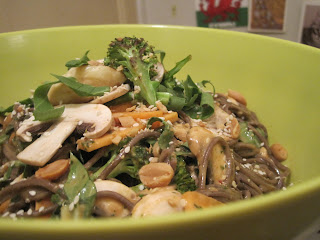 Despite being (in my opinion) vastly over-used, balsamic vinegar does have its place in vinaigrettes when used with caution.

Make the "Easy, classic vinaigrette" above with balsamic vinegar rather than red wine vinegar and it goes beautifully in a lentil and carrot salad. A couple of drops of liquid smoke, strange as it sounds, works really well here too. 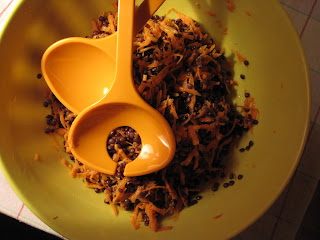 Or, if you're making an antipasti salad with already-oiled ingredients like sun-dried tomatoes or roasted peppers in oil, marinated mushrooms, olives, etc, then all you need is a small splash of balsamic vinegar, with no extra oil. 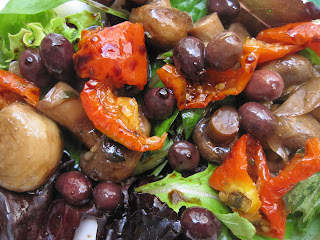 Look how sad these avocado halves are. I think they want walnut oil and red wine vinaigrette, with plenty of mustard to thicken... 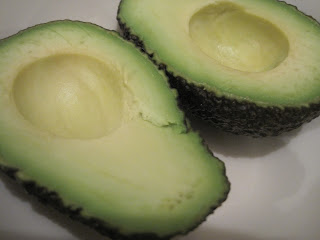