There's a quotation floating about wherein a French person says that the problem with American food is that American cooks buy their croûtons. The wide variety of croûtons on sale in French shops suggests that this is a fine example of the pot calling the kettle black.

Some French people do make their own croûtons though, and it's so easy that you should too. You're only fifteen minutes away from adding the very best kind of crunch to your salads, soups, and life in general. 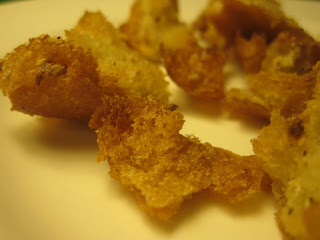 1. Preheat the oven to 200°C. While it's warming up, tear your bread into small chunks of a reasonably similar size. 1cm x 1cm is about right, but bigger is fine.

2. In a small bowl, crush the garlic into the oil and swirl around. Add the salt and pepper.

3. Spoon the flavoured oil over the croûtons on a baking tray, and mix to coat. Spread the oiled-up croûtons in a single layer on the sheet.

4. Bake for 3 minutes, poke around, and bake for a further 2 minutes, or until the croûtons are golden and crisp.

Then put them on everything you eat, and never buy croûtons again. 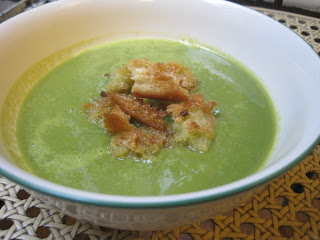 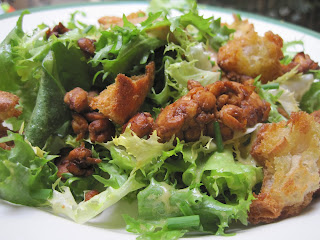 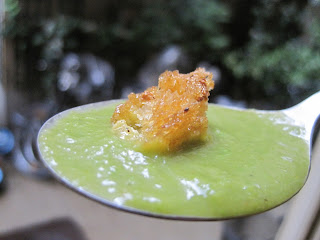