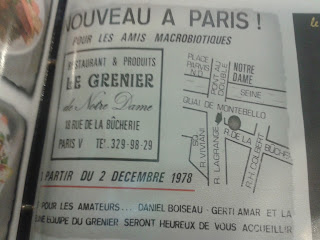 The restaurant serves up classic, health food-y vegetarian and vegan food right near Notre Dame. The place itself is cute as a button, with a couple of tables outside, and plants everywhere.

Food-wise, most of the dishes are nice enough, if not cutting edge. There's an emphasis on macrobiotic food, as well as salads and vegetarianised French classics. In true macrobiotic style, le Grenier used to serve fish, but has since stopped. Even in France, some people are beginning to realise that vegetarians don't eat fish. Better late than never.

Want some dodgy phone photos? Yes you do. Here's the macrobiotic plate in all its healthy glory: 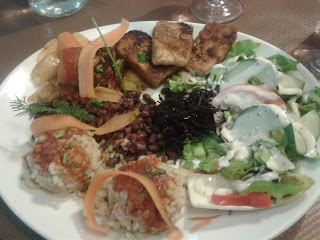 And here's the couscous, featuring a rather strange skewer of seitan and onions encased in a pastry thing that makes it look like a chicken leg: 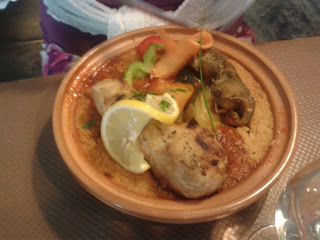 Juicing fans will like the Grenier: they'll juice pretty much anything for you before your very eyes, so you can wash down all that healthy food with a healthy beverage.