A French friend of mine was complaining about the weird food he'd been given when on a language exchange in England. "What type of thing?", I asked. "They eat cassoulet for breakfast", he replied. Presumably he was talking about those tinned Heinz baked beans with sausages. Not quite cassoulet, but hey.

Cassoulet is quite possibly France's best one-pot meal. They love it so much that there's even a Fellowship of the Cassoulet: a guild of folk who take cassoulet so seriously that they dress in funny clothes and parade around shouting about how much they love the stuff. Ahh, France.

The traditional version(s) of this dish include(s) lots and lots of different meats: sausages, pork belly, confit duck, chicken carcasses and more. This vegan version has three different meaty-type things, as well as lots of vegetables and mushrooms (plus a couple of secret ingredients) to add depth of flavour. 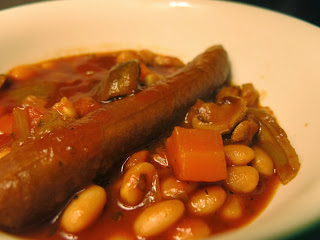 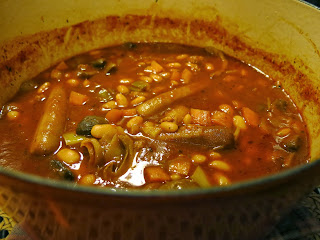 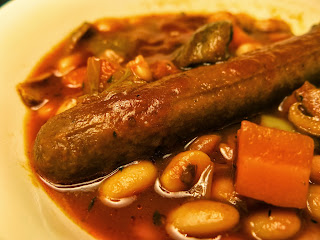