Since I decided to stop feeling guilty about buying pastry rather than making it, I've made a lot of tarts. Savoury tarts are a great way of making people think you've spent longer in the kitchen than you actually have. Just buy some pastry, blind bake it, top it, bake it, and you're done.

Most recently, for a picnic, I made a tomato tart with Tartimi Boursin-style not cheese spread and slices of garlic. After eloquently describing it as looking 'like the world's driest pizza', Omni had thirds. 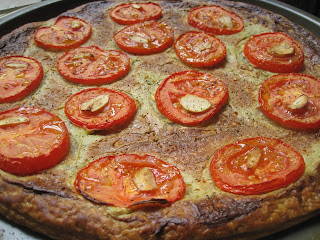 It's so easy, it really doesn't deserve a recipe. Just blind bake some puff pastry at 200°C for 8 minutes or so. Then spread the Tartimi over the top of it. Then layer on some tomato slices. Then Add some thinly sliced garlic. Then drizzle with olive oil. Then bake at 180°C for 20 minutes or until golden and handsome. Then have a picnic. 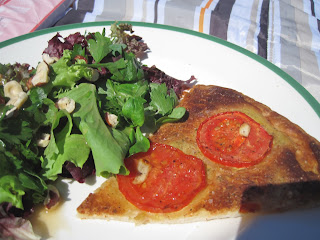 Yeah, I take real (Spode) china plates to picnics sometimes. Metal cutlery too. I'm classy like that.
Posted by Unknown at 21:54