Super fresh ingredients prepared simply but with lots of skill and care. The older I get, the more that latter thing seems to matter to me. When I look at a plate of food, I want to be able to tell that the person who put the food there did so with care. That they don't hate their job, or aren't just passively uninterested in serving people nice food. None of that please.

Hobbes cares, and it shows. Little touches like rosemary sprigs in the water jug are nice, but it's mainly the good service and the care and attention paid to what is on the plates that makes me love Hobbes.

Here's the dish of the (other) day: 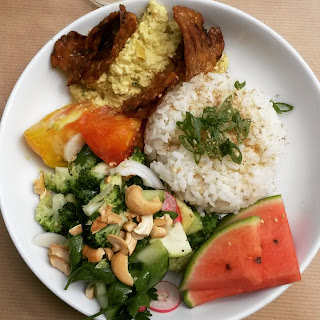 Here's the burger, topped with smoky tempeh and accompanied by potatoes so good they might as well have been cooked in goose fat (they weren't): 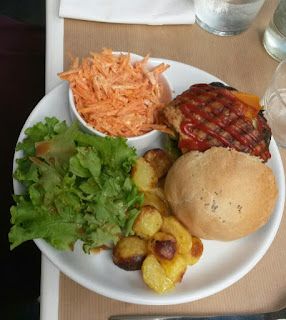 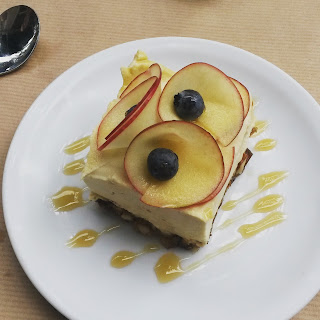 Everything was truly delicious. All the ingredients taste of what you'd like them to taste of: themselves, nicely seasoned. The coffee was heavenly too - they just can't go wrong.

Hobbes is entirely vegetarian, mostly vegan, and all organic. It's located in the 19th, which is an area that not enough visitors to Paris make it to, but they should! The restaurant is a stone's throw from the beautiful Buttes-Chaumont park, and you can get your food to go if you're feeling picnnicky, which I often am.