What can vegans eat in typical Paris cafés and restaurants?

Quite a lot of folks contact me via my instagram account, to ask a variety of questions about vegan options in Paris, and I'm always happy to help. I love this city, I love vegans, and I want visiting vegans to have a wonderful time while they're in Paris.

This evening I received the following message from the lovely Lauren (check out her instagram here!):

Q. "Hey, I'm a vegan living in the UK and I'm about to go on an art trip to Paris with my school. We will probably be going to quite standard and normal cafes there for meals. I was wondering if you knew if they had any sort of vegan options in average Parisian cafes / restaurants? And if so, what are they like? Thanks so much. xx :)" 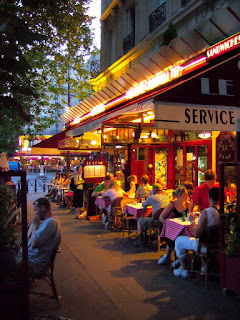 A. This is a really good question, and one I haven't answered yet on the blog. The closest thing so far is A vegan walks into a French restaurant..., where I essentially tell you to walk right back out again and go get falafel / Turkish / Japanese food. But that's a bit defeatist, especially for someone who doesn't have any say in where they get to eat while visiting Paris.

So here goes. What can vegans eat in typical Paris cafés and restaurants?

Veganism is on the up and up in France generally and Paris in particular. However, it's still very far from the mainstream. There are now lots of great vegan restaurants in Paris, but they're a bit of a separate entity, and vegan options haven't yet filtered down onto your typical Paris menu. That doesn't mean you'll have to go hungry, even in the most bog-standard traditional French eatery.

Best-case scenario: you hit the jackpot, and find a couple of naturally vegan things on the menu. Vegan things that even French omnivores want to eat, they're so good! 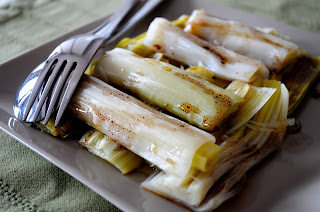 Poireaux vinaigrette = leeks that have been boiled and refreshed, then are served cold in a vinaigrette dressing. Better than it sounds, and a genuine French classic that's naturally vegan: that rare treat! Occasionally, chopped hard-boiled egg may be sprinkled on top, so you might want to ask about that. Usually you're fine though.

Avocat vinaigrette = avocado, again with vinaigrette dressing. You can't go wrong with this. 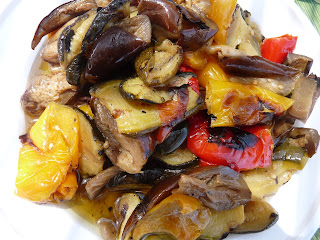 Ratatouille = you know. It's rarely / never offered alone, but if you spot ratatouille on a menu as an accompaniment to a meaty dish, be brave and ask for a plate of it on its own!

Second-best-case scenario: you hit a different type of jackpot, and find yourself in a place with friendly waiters and accommodating cooks. In this case, you can politely ask for 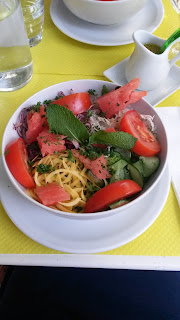 Une assiette de crudités = literally, a plate of raw things. These can sometimes be fabulous, with hearts of palm, sweetcorn, juicy tomatoes, grated carrots, shaved purple cabbage and all manner of other crunchy veggies. Your average Paris café or restaurant will have plenty in the kitchen to whip you up a decent plate. Smile a lot and make eye contact and you're in with a chance even with surly Parisian waiters.

Worst-case scenario: you hit no jackpot at all, and have to make do with the two small, over-priced side dishes that any Paris eatery offers: 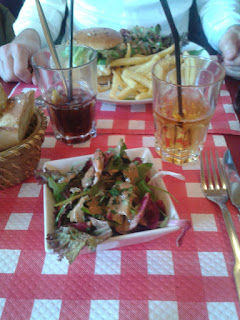 Une assiette de frites = a plate of chips / fries. Ask for ketchup and mustard and knock yourself out.

Une salade verte = lettuce leaves. Usually better than it sounds: often a nice mesclun mix rather than just iceberg lettuce. Still. Get some chips to go with it!

If all else fails, there's always bread. The vast majority of French bread is vegan. If it's baguette that has a bright white crumb and a shiny top crust, then beware. Otherwise, make yourself chip and lettuce sandwiches and vow to try one of these vegan-friendly restaurants in Paris for your next meal!

To end on a happy note, there was that time in Deauville (in Normandy, by the sea) when I found THIS on the standard menu in provincial France. Hope springs eternal! (Impossibly good best-case scenario). 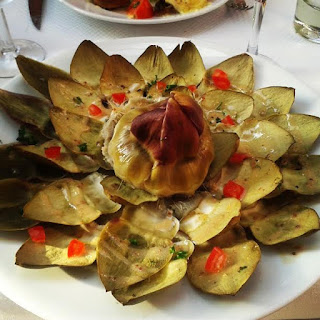 Let me know if you have any other top tips for eating vegan in typical French restaurants!